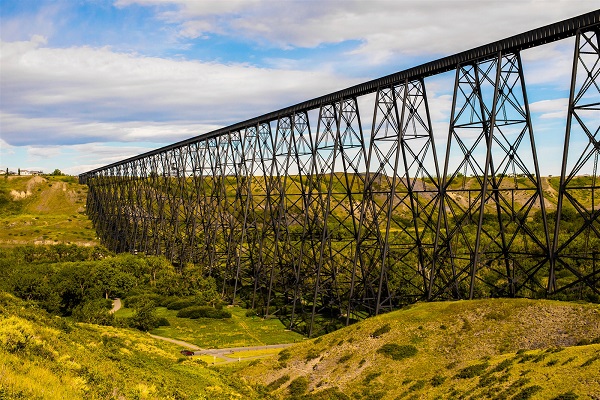 The longest & highest trestle bridge in the world!

This massive steel trestle over the Oldman River was designed by the Canadian Pacific Railway's bridge department in Montreal, Quebec. The field work was directed by CPR's Assistant Chief Engineer John Edward Schwitzer. The steel work was manufactured by the Canadian Bridge Company of Walkerville, Ontario.

Coal was a very important industry for the area. Initially coal was transported by barges navigating the Belly River (now called the "Oldman River").

The new railway was key to providing efficient shipping of the coal safely year-round. With the growth of coal mining in the city, the population of Lethbridge continued to grow. Need for rail line access for the mines saw the construction of bridge.

Planning began in the late 1890's. Engineers worked several years and special equipment was designed and brought in.

Construction began in August of 1908. The engineers and construction crews faced many challenges including a severe flood in the first year of construction, the bridge was completed June 22, 1909 and officially opened on November 1, 1909.